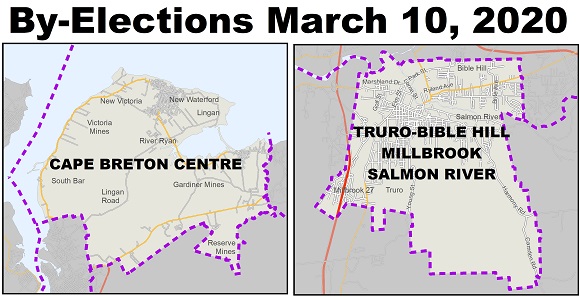 Candidates are officially declared elected when the writ of election for their electoral district has been completed and returned by the returning officer to the Chief Electoral Officer per section 159 of the Elections Act. The writ may be returned as early as the tenth day following election day (March 20, 2020).

By-election Financial Reporting
Elections Nova Scotia reminds candidates from the by-elections held on Tuesday, March 10, 2020 in the electoral districts of Cape Breton Centre and Truro-Bible Hill-Millbrook-Salmon River, and the registered political parties that financial reports are due in the weeks and months ahead. All reports are to be sent the Chief Electoral Officer.

The attestation that the List of Electors has been destroyed is due on March 20, 2020.

Candidate financial reports, including audit reports, are due on June 8, 2020. It is also important to remember that there are fines of $50 per day for late candidate reports.

Registered party financial reports are due on July 8, 2020.

By-elections will be held on Tuesday, March 10, 2020, to elect members to serve in the House of Assembly for the electoral districts of Cape Breton Centre and Truro-Bible Hill-Millbrook-Salmon River. The following days are pursuant to the Elections Act.

ELECTION DAY
Tuesday, March 10, 2020 - 8 am – 8 pm
On election day, you must vote at your assigned voting location or the returning office in your district.

Prior to election day, eligible voters can vote early at the returning office in either of the electoral districts in which a by-election is being held or any of the Community Poll locations.

WRITE-IN BALLOT APPLICATIONS
By Mail Deadline: Saturday, February 29, 2020 by 6pm
In Person and by agent: Tuesday, March 10, 2020 by 3pm
Write-in ballots conducted every day except Sunday during hours the returning office is open.

TO VOTE you must be an eligible elector: